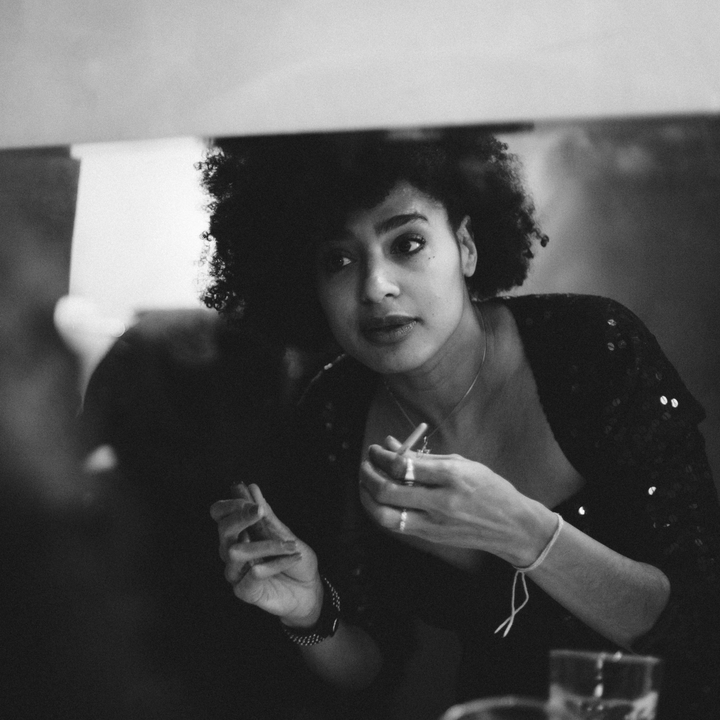 From Woodstock NY comes the beautiful, free spirited soulful sound of Simi Stone. Simi describes her sound as ‘Mountain Motown with a sprinkle of pop’

Simantha Molly Lou Sernaker (aka Simi Stone) is a renowned musician, songwriter, and visual artist born and raised in the storied town of Woodstock, NY.  With a Jamaican father and mother a disciple of Swami Satchidananda, Simi fit right  in to the creative “hippie” culture of the notable town while still remaining an artistic outlier.

With a knack for music, performing, and comedy, it became very clear to Simi’s mother that her outgoing, yet sensitive child needed an outlet for her talents.  At only seven years of age she began playing classical violin and studying ballet. At age ten she was writing and recording her own songs while performing them on the playground.  She was soon admitted to the New York Conservatory for the Arts, where she became a student of musical theatre, jazz dance, and received vocal training. During this time she attended high school where she thrived in an improv comedy troupe and a highly renowned youth orchestra.

Upon graduating from high school, Simi was accepted to Marymount Manhattan College Theater Department and moved to New York City, where she enjoyed her new freedom and immersed herself self in acting and music.

Music became a greater passion.  Simi painted her violin with pink and yellow flowers and made it electric. She joined a band with fellow students, The Slithy Toves, named after a poem, in Lewis Carroll’s novel Alice’s Adventures in Wonderland,  played shows on the Lower East Side and The Bowery, gathering a following of fans.

With her well-honed performance background, she began experimenting with new perspectives, different sounds, styles, and band formations. She fell in with a handful of punk rock groups and played live shows. These connecting forces and people became a collective that would become the foundation for the Afro-punk movement.  She became a staple in the New York City late night dance scene,  where she found a niche making solo appearances with her electric violin set to dance music. Simi was billed with fire-eaters, comedians, performance artists, and DJs that made a circus like ensemble.

Simi was soon creating a more gritty rock and roll sound and formed her band Suffrajett.

She earned her stripes the old fashioned way,  touring and playing every club under the sun from east coast to west coast , including House of Blues in L.A, Chicago and NYC’s famed Bowery Ballroom, CBGBs and several Summer Stage events with Joan Jett, The Roots, and Erika Badu.

With Suffrajett she released two indie Records both of which garnered her considerable praise from magazines such as Rolling Stone and Esquire. She earned five stars in the The Chicago Sun Times. Time Out Chicago said of Suffrajett: “This New York via Chicago band has justifiably gained a rep for Detroit style whiplash rock and roll without acting like it’s a low down dirty shame…When she’s not sounding like The Shangri Las Mary Weiss, she’s summoning the ghost of T-Rex’s Marc Bolan, who knew how to make a whisper sound like a threat”

She toured America and Europe with Suffrajett, several times, always shocking people with her presence and amazing live shows,  before she made her way back to woodstock. Once home she continued to write.

Simi explains, . “My songs tend to reflect the conditions of being alive.  The feelings come first, then the words. Human beings fascinate me.  How to find peace.  How to hold on to yourself. Love, despair, and healing inspire me.  Ultimately, I want to make people feel joyful from the music.  Healed by the music,”

While in Woodstock Simi hooked up with trio The Duke and the King, featuring Simone Felice, Bobby Bird and Nowell Haskins. They co- wrote the band’s second album, Long Live the Duke and the King, which garnered her critical acclaim and cemented a new playing field for her in the UK and Europe, Allen Jones from Un-cut magazine named her "The sensational Simi Stone" and calls her voice "striking" and her violin, "a thing of mournful beauty”

In 2014 Simi went solo. She struck up a creative partnership with known producer, David Baron ( Michael Jackson, Lenny Kravitz , Meghan Trainor and Bat for Lashes). They recorded a series of EPs and Simi’s self-titled debut album, which she dubbed “Mountain Motown”. filled with soul, rock, pop and Motown inflections. Together they gathered an amazing band of players to record including Zachary Alford( David Bowie, Gwen Stephanie B52s, Sara Lee ( Gang of Four, Indigo Girls, Gail Ann Dorsey( David Bowie) and others to play on the records and do live shows as the Simi Stone Band. Hudson Valley Magazine featured Simi on the cover and designated her "Best New Artist".  "It's crazy that Simi isn't famous yet.” the magazine comments.

Seth Rogovoy, award winning pop critic said, “What the world needs now, and not a moment too late- is Simi Stone, in all of her multitalented, glorious appeal.”

Over the last few years Simi has found herself as a guest vocalist on two of Natalie Merchant’s albums: the 2014 self-titled Natalie Merchant as well as Paradise is There: The New Tigerlily Recordings in 2015, and touring, performing, and recording with The New Pornographers, Natalie Merchant, Neko Case, Conor Oberst, Gipsy Kings, Simone Felice, and Amy Helm. Aside from her musical accomplishments, The Visual Works of Simi Stone were showcased at Ardnaglass Gallery from May – July 2016.

Simi’s backing vocals graced the stage on David Byrne’s 2018 world tour and she closed out the year with the release of her second album recorded with Baron, The Rescue.