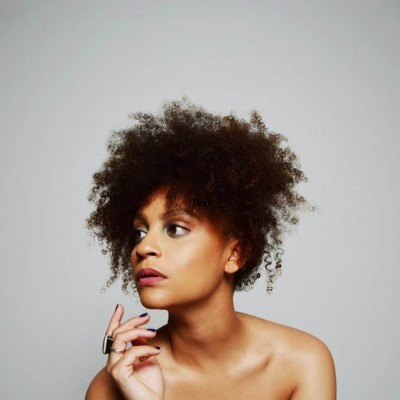 Sarah Elizabeth Charles is a rising vocalist/composer based in New York City. Her musical output has been described as a “genre of one” (DownBeat Magazine), “soulfully articulate” (NY Times) and “an unmatched sound” (Jay Z’s Life+Times)

Trying to categorize or label vocalist Sarah Elizabeth Charles is a futile pursuit. Is she a hypnotic modern jazz vocalist? Is she a neo-soul experimentalist with jazz and R&B inflections oozing from her vocal chords? Is she an incredible talent, bewitching and beguiling with her every vocal gesture? Is she all of that, yet something completely different and unique? The answer to all four questions is the same: absolutely."- Dan Bilawsky (All About Jazz)

Sarah Elizabeth Charles is a vocalist/composer based in Brooklyn, NY. She has worked and studied with artists such as Chief Xian aTunde Adjuah, George Cables, Geri Allen and Sheila Jordan and has released three critically acclaimed albums with her band, SCOPE between 2012 and today. As the active vocalist in a number of bands (including SCOPE, Ajoyo, duo with Jarrett Cherner, Jesse Fischer and Chief Xian aTunde Adjuah). Charles has performed at many venues throughout her career. These have included The White House, Carnegie Hall, the first annual Culture Summit in Abu Dhabi, The Kennedy Center, the Rose Theatre with Jazz at Lincoln Center and many more. She has also had a commissioned composition performed at The National Gallery in Washington D.C. via The Canales Project "Hear Her Song" initiative.

In addition to her performances, Charles is an active educator as well. She works as a lead teaching artist with Carnegie Hall’s Sing Sing Correctional Facility Musical Connections workshop, has a private lessons studio in New York City, is an adjunct professor at The New School for Jazz and Contemporary Music, co-teaching a course she designed called "Jazz and Gender” (with Caroline Davis) and has developed an early childhood music education program with Rise2Shine, a non-profit organization based in Fond Parisien, Haiti. In 2019, she was one of five recipients of the Yale School of Music's Distinguished Teaching Artist Award. In 2020, she was selected to be one of five members of the Joe's Pub Working Group, as a recipient of the New York City Women's Fund grant in support of her band's fourth album to be released in 2021 and as a recipient of Chamber Music America's New Jazz Works grant.

Charles' musical output has been described as a “genre of one” (DownBeat Magazine), “soulfully articulate” (NY Times) and “an unmatched sound” (Jay Z’s Life+Times). Her critically acclaimed sophomore project, “Inner Dialogue”, released in 2015 on Truth Revolution Records, features her band along with co-producer/special guest Chief Xian aTunde Adjuah. Her third album, "Free of Form" was released on Stretch Music/Ropeadope and features SCOPE as well as Adjuah as co-producer/special guest. As Charles works on the completion of her band's fourth album, "Blank Canvas" (to be released on November 11th, 2022) and many other creative endeavors, one can only look to the future for more unique and boundary pushing music from this one of a kind artist.