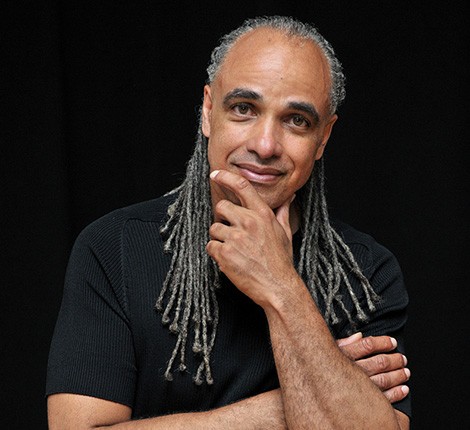 From turning the jazz world upside down with Miles Davis, to exploring new fusion frontiers with Weather Report, to dominating pop radio with Sting, Mino Cinélu has brought his signature style of drums and percussion to the biggest artists in modern music.

Miles Davis, Sting, Weather Report, Herbie Hancock, Tracy Chapman, Peter Gabriel, Stevie Wonder, Lou Reed, Kate Bush, Tori Amos, Vicente Amigo, Dizzy Gillespie, Pat Metheny, Branford Marsalis, Pino Daniele, Earth, Wind & Fire, and Salif Keita – a small selection of the international jazz, world, and pop stars that Mino has worked with since the late ’70s. All of which is to say that Mino draws on a legacy of sound and space that inform his work while staying current and modern.

Born in Paris to a French mother and a father from Martinique, Mino mainly taught himself, first guitar and bass, and then drums and percussion. His childhood – more typical then than now – was chaotic and without supervision. As such, his professional music career launched at age 15.

By the time he turned 24, Cinélu had been living in New York City for two years, gigging with some of the city’s top players in jazz, funk, and gospel, when he was approached by a man who’d mark a major turning point in his life and career: Miles Davis. Beginning with the concerts that furnished the critically acclaimed We Want Miles (1982) album, Cinélu joined Davis’ band.

In the years that followed, Mino has released albums under his own name, and appeared on countless records as a composer, co-leader, guest or sideman. He has scored music for films, documentaries, and commercials. For the film La Californie, Mino was nominated as one of the 10 best film composers at the Cannes Film Festival.

Whether playing percussion, drums, guitar, keyboards, or singing, Mino brings his infectious personality full of warmth and joie de vivre, coupled with decades of intense study in a wide variety of international styles — from the streets of Paris to Dakar, the Mississippi Delta to Japan, and from the Caribbean to the Middle East. He’s equally comfortable being the consummate accompanist as he is being the center of attention, and can command an extensive ensemble as well as perform his own breathtaking one man show.

Mino has earned a reputation as a master-of-all-trades. He has solo album credits of his own: Mino Cinélu, Quest Journey, and La Californie. In addition, he produced the album Carnet De Bord for French singer/songwriter Bernard Lavilliers as well as Swamp Sally, a duo release with himself and pianist Kenny Barron. Mino was also the co-leader and producer of World Trio featuring himself, guitarist Kevin Eubanks, and bassist Dave Holland.