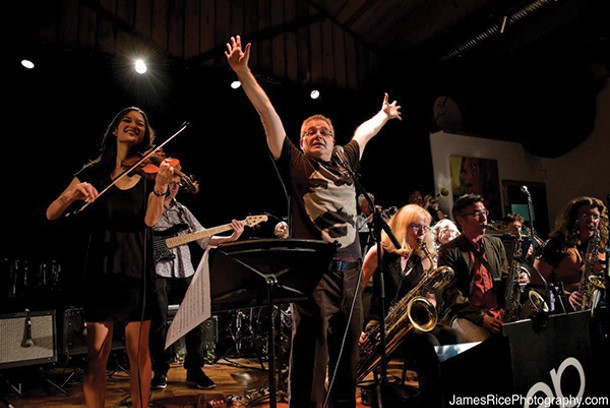 Have you ever heard a song and thought, "Hey, that sounds like....!" EPBB plays BOTH versions of certain songs and lets the AUDIENCE decide if it was truly stolen or not. The world's zaniest big band returns to re-form the music of Zappa, Pink Floyd, Yes, King Crimson, Miles Davis, Wayne Shorter...with comic diversions, because they can't help it!.

"Palermo developed these charts during years of live shows with these musicians, and their mastery of the material shows in the performances, which turn on a dime yet feel fierce with spontaneous invention.... Palermo’s arrangements and these performances are precise, dedicated, raucous and incisive—just like Zappa himself." – JazzTimes

This often entails head-spinning in-jokes, such as performing Traffic’s 1971 tune “The Low Spark Of High Heeled Boys” over Zappa’s bass line for his composition “Chunga’s Revenge.”

The Ed Palermo Big Band performs monthly at the Iridium in Manhattan and regularly at The Falcon in Marlboro, NY, where Palermo often scripts elaborate thematic evenings. At one such event, vocalist Napoleon Murphy Brock—a longtime Zappa vocalist who frequently works with Palermo—sang the line “I’m never getting married” (from Jimmy Webb’s “The Worst That Could Happen”) as Palermo stumbled onstage in prison stripes for an evening dedicated to his 34th wedding anniversary.

Most of Palermo’s humor, however, lies in the music’s richly textured citations and juxtapositions. The scores themselves are funny.

“I wouldn’t call my thing a comedy show,” he said, “but it’s got a lot of humor in it. I often think that jazz takes itself way too seriously. Maybe that makes my thing stand out a little more.”